The Cognitive Neuroscience research line groups several research programmes at ITAB whose general aim is describing the functional architecture of the human brain, and the neural bases of cognitive processes important for everyday life activities.

A recent area of interest is the study of the brain's intrinsic functional architecture and its relationships to functional networks recruited during tasks. The intrinsic functional architecture is studied by examining the inter-regional temporal correlation of the blood-oxygen level-dependent (BOLD) signal recorded at rest by functional MRI (functional connectivity-by-MRI, fcMRI). In recent work we have described the association between fMRI spontaneous fluctuations and EEG activity simultaneously recorded (Mantini et al., 2007, PNAS); changes in fcMRI associated with perceptual learning & predisposition ( Lewis et al., 2009, PNAS).

This project is coordinated at ITAB as part of the 7th Programmatic Framework of the European Union (http://brainsync.sytes.net/) 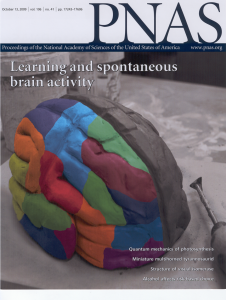 Please confirm, if you accept our tracking cookies. You can also decline the tracking, so you can continue to visit our website without any data sent to third party services.
WordPress Appliance - Powered by TurnKey Linux